Egyptian Canadians Condemn Today's Verdict Against Mohamed Fahmy and Other Al Jazeera Journalists
- FOR IMMEDIATE RELEASE -
(Ottawa, August 29, 2015) The Egyptian Canadian Coalition for Democracy (ECCD) condemns today's verdict that sentenced Canadian journalist Mohamed Fahmy along with two other Al-Jazeera journalists to 3 years in prison. A court in Cairo convicted Mohamed Fahmy, Baher Mohamed, and Peter Greste for allegedly spreading false news, aiding a terrorist organization, and working without a license.
"The verdict confirms that the Harper government's unconditional support of coup regime provides a green light for the Egyptian regime to continue its oppression even against Canadian citizens," said Ehab Lotayef, ECCD's Board Chair. "Today's conviction is part of the ongoing human rights violations which range from lack of due process to targeted assassinations," added Mr. Lotayef.
Considering the reputation of Egyptian prisons, the Canadian government ought to be extremely concerned about the well being of Mr. Fahmy, a Canadian citizen. According to Human Rights Watch report, the Egyptian authorities have jailed more than 41,000 people since the 2013 July 3rd military coup. At least seventy of those detainees have since died in custody due to torture and medical negligence, according to a report by the Arab Organisation for Human Rights in the UK.
In view of today's latest travesty of justice by the Egyptian judicial system, ECCD calls upon Mr. Harper and the Canadian government to abide by Canadian values and take a principled position. ECCD calls upon the Canadian government to publicly, and in no uncertain terms, condemn and contest the verdict and utilize all possible means to free Mohamed Fahmy and facilitate his return to Canada.
About ECCD: Egyptian Canadian Coalition for Democracy (ECCD) is a politically independent, non-affiliated pan Canadian organization with chapters in Ottawa, Montreal, Toronto, Quebec City, Winnipeg, Saskatoon, Regina, Calgary, Vancouver, and Kingston, which advocates for democracy and human rights in Egypt.
For more information:www.eccd.cainfo@eccd.caEhab Lotayef: (514) 941-9792
Ottawa: ottawa@eccd.ca, Sherif Elkholy: (613) 295-3994
Toronto: toronto@eccd.ca, Deena Abul Fottouh: (289) 259-7902
Montreal: montreal@eccd.ca, Ahmed Abdelkader: (514) 928-8887
Vancouver: vancouver@eccd.ca, Tarek Ramadan: (604) 721-4555
Calgary: calgary@eccd.ca, Mostafa Elhoushi: (403) 702-4156
Kingston: kingston@eccd.ca, Mohamed Salah: (343) 333-0752
Posted by Mohamed S Kamel at 11:35 PM No comments:

Posted by Mohamed S Kamel at 10:24 PM No comments: 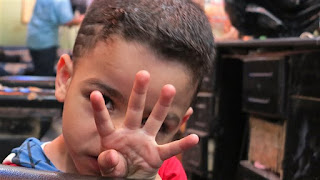 Second Anniversary of the Raba’a Massacre

Today marks two years since the tragic Raba’a Massacre when Egyptian military and police force dispersed, by brutal force, the peaceful sit-ins of Raba’a Square in Cairo and Nahda Square in Giza. Egyptians from all walks of life, and from different ideological and political backgrounds, formed sit-ins in Raba’a and Nahda Squares following the 3rd of July, 2011 military coup, in order to express their complete rejection for it and to demand the restoration of democracy.

According to Human Rights Watch, the Raba’a Massacre is, “one of the world’s largest killings of demonstrators in a single day in recent history”. In a matter of hours, thousands were killed by security forces, some were burned to death and thousands more were arrested on the day.

Dr Maha Azzam, Head of the ERC said, “Raba’a is a crime against humanity for which there has been no accountability. The Egyptian people and all free people demand justice for the victims of the crimes committed by Egypt's military regime and will not be silenced until justice is realised. Furthermore, Egyptians are proving every day that Raba’a is not just a memory but a powerful ongoing struggle for freedom and rights.”

Egyptians continue, to this day, to demonstrate daily against the military coup, and today has seen an increase in the numbers of demonstrators in Egypt which clearly signals that the revolution is still alive in the hearts of Egyptians and that they are determined to continue on the revolutionary path.

The Egyptian Revolutionary Council urges all Egyptians in Egypt, and the free people of the world, to commemorate the humanitarian tragedy of the Raba’a Massacre, and to stand side-by-side with Egyptians demanding democracy, freedom and social justice.

Re: Secretary of State John Kerry's visit to Egypt and the resumption of US-Egypt Strategic Review.

The Hon. Secretary of State,

It is with much regret that we observe the dire consequences of US foreign policy on Egypt, in what can only be described as the trampling on the innate rights of the peoples of the region to freedom and justice.

The support of the US for the coup of July 2013 was no doubt based on what was believed to be a pragmatist, Kissinger like, approach to foreign policy to ensure that Egypt remains securely a ‘pro US’ power. It was also assumed that it would be a way of controlling the tide of popular political sentiment calling for participation and accountability. That fear justified for the US and it's democratic allies the betrayal of the core values of human rights and respect for the rule of law which was seen as a price worth paying.

Unfortunately for both the US people and for Egyptians, the consequences of this policy has only served to exacerbate all the instabilities the US State department feared in the first place.

General Sisi turned out to be not only politically incompetent, incapable of building consensus other than in a crude nihilistic sectarian discourse, but equally, economically and militarily incompetent.

The economy is in a worse shape than before, corruption is rife and the lot of ordinary Egyptians (look at unemployment for example) has deteriorated. Even his oligarch supporters are getting nervous.

Militarily he seems to have managed to lose control of large swathes of Sinai to ISIS through the pursuit of military tactics which even his Israeli allies find incompetent.

Worse still, his political incompetence married to a brutal personality and a lack of self restraint has resulted in the documented murder of thousands of dissidents, torture, rape of women, abuse of children and disappearances as a means of political control, thus promoting deep burning resentment among all sectors of Egyptian society. In sum in Sisi's two years in power according to Human Rights Watch, Egyptians have experienced the worst massacre in the modern history of their country. His promotion of unprecedented sycophancy in his circle of advisors and in the state media ensures that he continues blundering on undeterred.

So why is this detrimental to US interests? The obvious answer is that Egypt is now infinitely more unstable than in 2011. However, there is a more profound reason. In 2011 there was an opportunity with the majority Islamist trend in Egypt that was convinced that democracy was a viable political system, a position that stood contrary to that of violent extremism. The aborting of the democratic experiment in Egypt with the acquiescence of the US, not only conveys a message to all political players that western powers do not really believe in their values beyond their borders, but much more dangerously, it is slowly creating a situation where the people of the region begin to believe that democracy cannot work in their region, which in turn attracts those disillusioned and angry youth to seek violent alternatives to bring about change.

It is therefore for reasons of mutual self interest, and not only through an appeal to the values of democracy, and the standards of international law, that we believe that the US should review its policy towards Egypt and seek to do two things quickly. First, relieve and reverse the dire human rights situation by putting pressure on the Egyptian military to immediately halt political verdicts of execution, free all political prisoners, ensure that torture, rape, disappearances , arbitrary arrest and judicial as well as extra judicial killings cease immediately. Secondly, push hard for the reinstitution of democracy by asking for lifting all controls on the media and freedom of assembly.

The longer the current political order continues the greater the likelihood of a messy outcome and greater the anger at the US. The resumption of the US - Egypt Strategic Dialogue, suspended since 2006, will be clearly seen as a sign of the United States's approval of the Sisi regime and its repressive policies.

We know that in the long term democracy is the only way to achieve political stability. The failure of the US to stand up to a regime that has destroyed Egypt's democratic experiment will only serve to convince an increasing number in the region that ending repression can neither be achieved through democratic means nor in harmony with western interests. Neither the US, nor its regional allies can possibly afford such an outcome.

Mohamed S Kamel
Brossard, Québec, Canada
*Mohamed S. Kamel: is a Freelance writer, the editor of http://forafreeegypt.blogspot.com/, he is a professional engineer, a recognized project manager professional (PMP), he is Member of several civil society organizations, a co-founder and member of the BoD of MDC-CRM, co-founder and ex-Secretary General of The Egyptian Revolutionary Council (ERC), a co-founder of the Egyptian Canadian Coalition for Democracy (ECCD-CECD), Egyptian Worldwide for Democracy and Justice (EW4DJ), Canadian Egyptian for Democracy (CEFD), National Association for Change in Egypt (Taghyeer – Canada), Alternative Perspective Media (APM-RAM), , Quebec Antiwar movement “Échec à la Guerre”, Coalition for Justice and Peace in Palestine “CJPP”, ex-president and co-founder of the Canadian Muslim Forum (CMF-FCM), member of the board of trustee in the Canadian Muslim for Palestine (CMP) and Cultural Center for Montreal Muslims (CCMM). He could be reached at public@mohamedkamel.com and followed at @mskamel